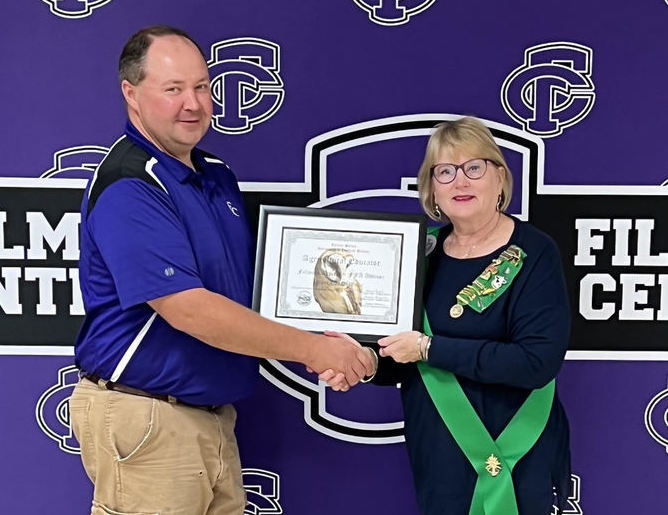 Kurt VanDeWalle, FFA Advisor of Fillmore Central received the prestigious Agricultural Educator Award from the National Society Descendants of American Farmers, honoring him for making an impact in the lives of his many agricultural students.

Bev Schuele, National Counselor and Nebraska Ambassador for the National Society Descendants of American Farmers presented Kurt his award on Thursday, September 8th at Fillmore Central. Bev Schuele stated that NSDOAF seeks to recognize agricultural advisors for their tireless efforts in promoting the importance of agriculture. Not only is he a great role model and mentor to his FFA students, but he serves his community in a variety of ways! Kurt says, “Even on days that are not as good as some, he can’t think of a different career he’d rather pursue.”

Kurt graduated with a degree in Agriculture Education in May 2002 and began teaching full-time at Humphrey Public Schools, where he taught for three years. In 2005, he took on the challenge of teaching at two schools at the same time when he was hired by Fillmore Central and McCool Junction. After two years, Kurt was hired full-time by Fillmore Central and has been teaching here full-time for the last 16 years. Kurt has had several students receive their American Degree, a few more get their State Degree, several state proficiency finalists, and five student teachers. His first student to become an Ag Teacher began teaching this year.

Kurt’s wife, Brandy, is the Extension Educator for Fillmore and Clay County. They have two daughters, McKenzie, 14, and Meredith, 8. Kurt and Brandy recently held their first international ag tour for high school students to the Dominican Republic. The tour highlights were visiting farms and processing centers to learn about the production and processing of cacoa, pineapple, bananas, and coffee. They also visited and had hands-on activities at an environmental school and an agriculture university. The group also did white water rafting and snorkeling. Kurt and Brandy have their next international ag tour for students scheduled for July of 2024 to Ireland.

The National Society Descendants of American Farmers is a newly formed lineage
society that honors American Farmers, Past, Present, and Future. Sixty-percent of
a one-time membership fee goes towards scholarships for deserving young men and women going into an ag-related field of study. In three years, over $60,000.00 have been given in scholarships and four have gone to Nebraska UNL Students!

For more information, please go to our website at: www.nsdoaf.com.